Have you purchased yours? Registration for WORKCON 2021: An Equitable Recovery 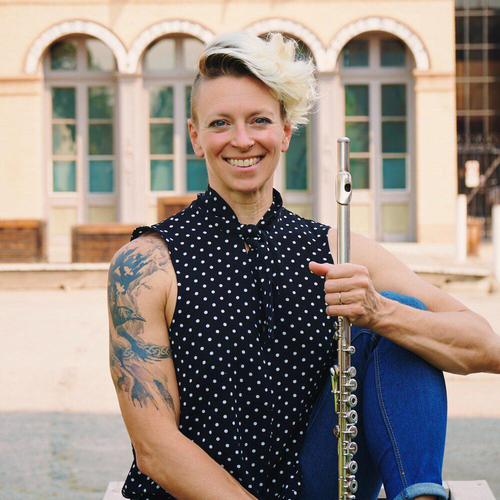 Talks covered by this speaker

Have you got yours yet?

Our All-Access Passes are a must if you want to get the most out of this event.

Newly-appointed flute professor at Sacramento State’s School of Music, Dr. Cathie Apple is one of the founders of Citywater new music ensemble. She is a regular performer at the Music at Noon concert series, and performs with Sinfonia Spirituosa baroque orchestra, the Sacramento Baroque Soloists, and Celtic group Cahersiveen.

An avid supporter of new music, Cathie has commissioned and/or premiered many works for flute and various chamber ensembles, has collaborated with composers such as Clare Shore, Nicholas Deyoe, Brent Chancellor, Nell Shaw Cohen, and Sunny Knable, and regularly performs on the Festival of New American Music in Sacramento.

Along with her specialization in modern music, Dr. Apple performs regularly on traverso, with baroque ensembles Sinfonia Spirituosa and the Sacramento Baroque Soloists. Her traverso is made by Martin Wenner and is modeled after a mid-18th century flute designed by Italian flute-maker Carlo Palanca.

Cathie maintains a private teaching studio in Sacramento and is the flute instructor at the Pacific Institute of Music in Folsom. Previous appointments include second flutist with the Las Vegas Philharmonic and adjunct faculty at the University of Nevada, Las Vegas and Southern Utah University. While in Las Vegas, Cathie founded NEXTET new music ensemble, and performed with them at the Edinburgh Fringe Festival.

Cathie earned her Doctorate from the University of Michigan, where she studied with Amy Porter. While in Michigan, Cathie also taught at Interlochen Arts Camp and was the yoga instructor for Amy Porter’s Anatomy of Sound workshop.

Cathie Apple, NSCA-CPT, has been teaching and training clients and students for nearly 20 years. In that time, she's specialized in yoga, weight lifting, cycling, and CrossFit. She's helped hundreds increase their mobility, cardiovascular health, and functional strength. She is a proponent of a return to natural movement patterns, with a focus on exercises that have immediate practical benefits to everyday quality of life. Her clients receive individualized protocols to address their specific needs and goals.

Using herself as a guinea pig for her training methods, Cathie regularly competes in Olympic-distance triathlons, and has done several marathons, obstacle-course races, a couple of Ironman 70.3 races, some CrossFit team competitions, and a Ragnar trail relay. Her less-competitive fitness exploits always involve backpacking in the wilderness; her favorite trip being the John Muir Trail.

Cathie is also a professional flutist, a career that often requires sitting in rehearsals for 2-3 hours at a time. The playing position for the flute in particular and its potential for injury drove her desire to research techniques that would prevent injury and enhance her ability to perform.

Your logo could go here!

If you'd like to get your brand in front of attendees following the categories this speaker is talking about (on this page, via email and during each talk) contact us.

We use cookies This website (and some of its third-party tools) use cookies. These are important as they allow us to deliver an exceptional experience whilst browsing the site.

By clicking 'Accept', you agree to the use of cookies. To learn more see our Privacy Statement.